Damian Hall had been pondering an attempt at the Pennine Way FKT, but always found a convenient excuse to shirk out of it. Then lockdown came and he was out of excuses.

Mike Hartley's record of 2 days, 17 hours and 20 minutes for running the 160-mile Pennine Way had fascinated me since I first hiked it in 2011. I revisited the lumpy backbone of England on two Spine Races. Despite some records/FKTs of my own, I didn't dare think of myself as an athlete in his class. The Pennine Way record terrified me. And yet it called at me too; with gradual, increasing, loudness. For four years I'd been pondering an attempt, but always found a convenient excuse to shirk out of it. Then lockdown came and I was out of excuses.

I didn't plan for my wedding as thoroughly as I planned for this. I phoned the legendary Mike Hartley, who was generous with his time. "I think the secret is to be able to run fast early on without damaging yourself too much," he said. Mike ran 170 mile weeks in training. I wouldn't be doing that, because I'd like to keep my marriage intact.

I worked on my perennially awful technique with The Lost Art Of Running-author Shane Benzie, tweaked my nutrition with sports dietician Renee McGregor, got a bespoke hydration plan from Precision Hydration, did ample strength work with Strength For Endurance, and even spoke to sports psychologist Dr Josie Perry to fine tune my motivation. Fuelling without animal products (easy), plastic waste (less so) and collecting litter would give me strong impetus to get it done.

Nothing motivated me more though, than a side bet with determined tea-dodger John; whoever ran slower had to drink the tea of choice of the faster runner.

I asked my good friends Tim Laney (who also paced Hartley and even donated him a shoe mid-run) and Mark Townsend to crew me, both ultra and fell-running veterans who'd completed the Spine Race and know when I need a foot up the backside. Vivacious Pennine Way fanatic and doctor Nicki Lygo, who had also crewed John, jumped in too, at the last minute. She knows the Pennine Way better than some guidebook authors and had a knack of producing fresh mango at crucial times. Plus Jess Palmer and Jen Scotney kindly volunteered to help out.

I'd never got a group of pacers together before and I tried to cherry-pick those who’d done well at the Spine or knew the Pennines well. I felt flattered that so many great runners were willing to help out. 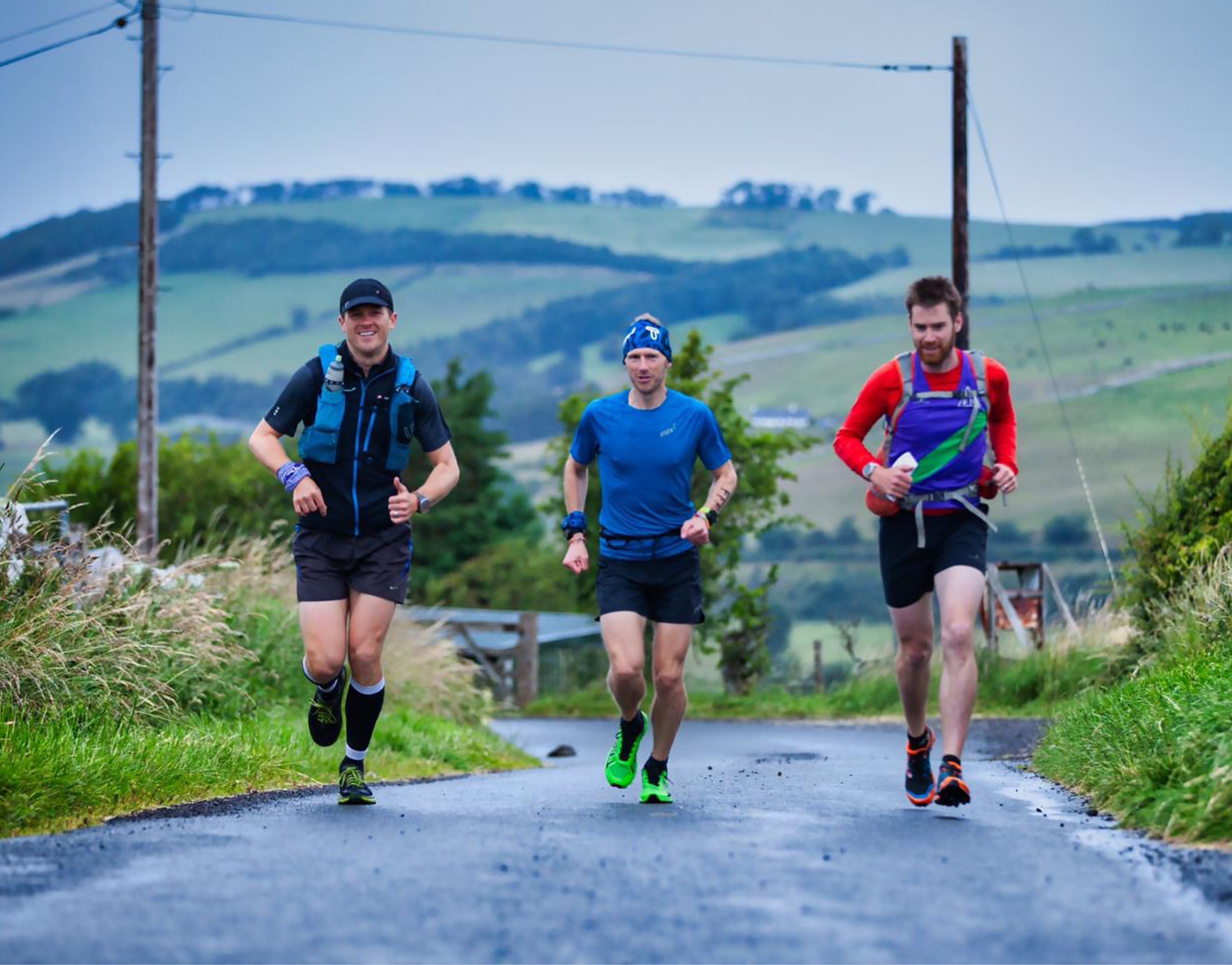 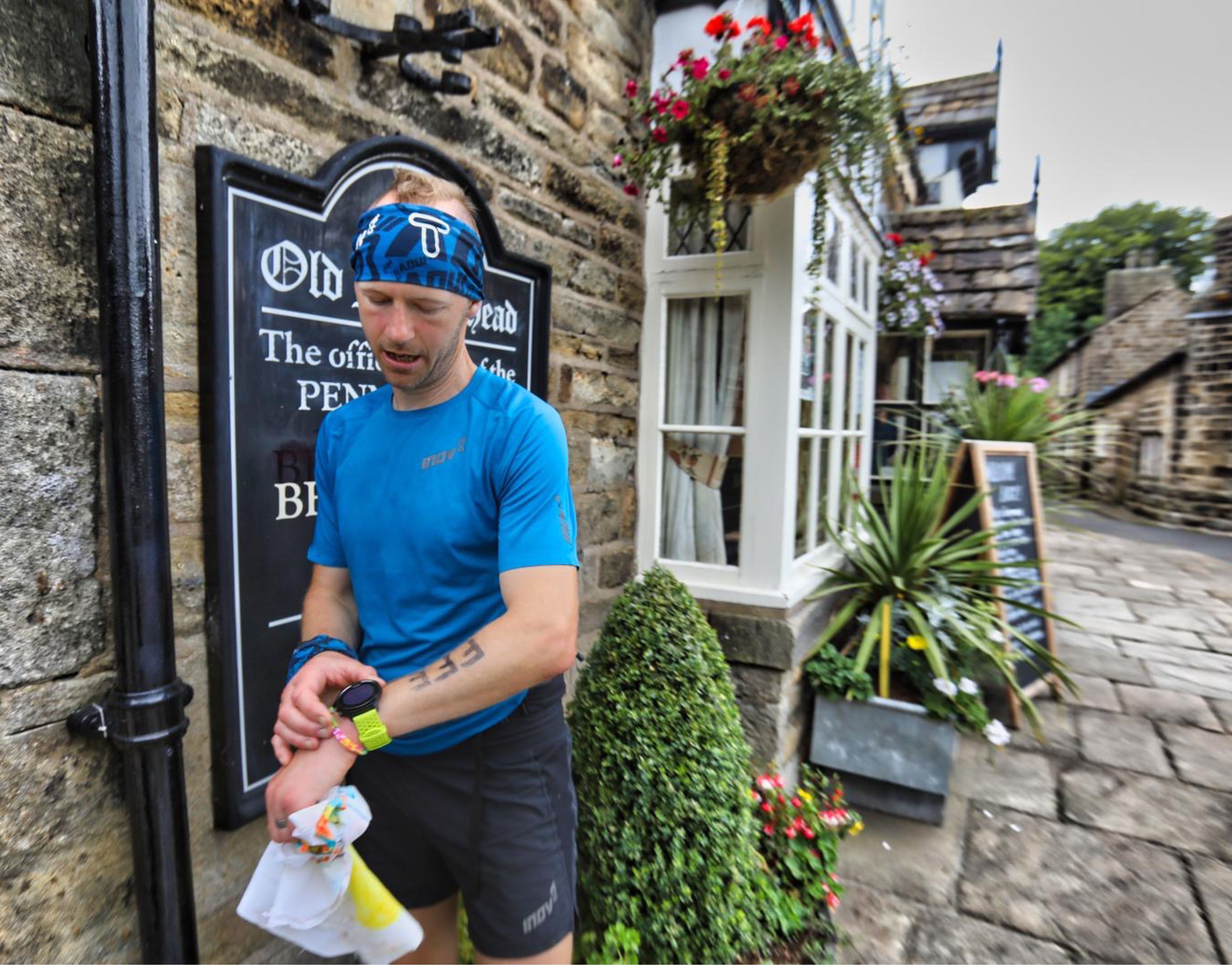 I created my first ever spreadsheet, which caused confusion and prompted deserved scoffing, from Martin Stone, Nicky Spinks and others. I felt happy with a conservative schedule, aiming to get me to Edale just ahead of John Kelly's new record and in time for last orders (by then I hadn't drank alcohol for four months). That way I felt I'd spend more time feeling relaxed and happy, rather than stressed by chasing a semi-arbitrary target. I wanted to be running well on day two and three. But also gradually build a buffer for any setbacks and power naps.

I was determined not to go out too fast as Andrew Higgins and Mark Clarkson led me over the big grassy volcanic lumps of the Cheviots. But that's hard after weeks of intense anticipation and I was a little up on schedule by Byrness. But everything felt comfortable.

I was almost an hour up when Jayson Cavill joined me for Hadrian's Wall. Then it was on to infamous Blenkinsopp Common and a bleak and fiddly section, enlivened by John Knapp, Kim Collison and a small noisey crowd in Slaggyford. Unbeknownst to me meanwhile, my crew were dealing with burst tyres and head injuries.

Cross Fell brought the sort of weather it's known for and in Dufton, at 2am, I had my first sit down, in a collapsable chair my crew would then 'lose'.

The super-efficient Elaine Bisson, Max Wilkinson, Martin Wilson and (for a shorter time) Paul Tierney had put up with me for some 30-plus miles and a long night. We arrived at Middleton-in-Teesdale at 7am, nearly four hours up on schedule. But mentally I was beginning to slide. I probably hadn't eaten enough.

The next section is classic Pennine Way. Undulating, unspectacular, boggy terrain. Gwynn Stokes, Alastair Black and Chris Davies pulled me along efficiently enough. Until I kicked a rock and totally stacked it. A 15-minute lie-down at the A66 seemed to reboot me. For a bit. Mike Hartley was at the Tan Hill Inn and the legend told me I was looking good (the kind fibber).

Matt Neale, Andy Berry and Martin Low dragged me across the moors and up mammoth Great Shunner Fell, in the wind and rain, which took forever. I tried another power nap at Hardraw. Which failed. I whinged, at one point, to my pacers, for going too fast (sorry guys).

We reached Horton-in-Ribblesdale, 170 miles in, at around 7pm, over three hours ahead of schedule. I was feeling kinda seasick (but the crowd called out for more) and the long steep climb up Pen-y-ghent, aided by Simon Franklin, Sabrina Verjee and Dan Bye, didn't help. I tumbled down the peak and into a waiting van for a 45-minute snooze.

After treating myself to fresh socks (whoop!), Ben Mounsey, Kirsty Hall and Jason Millard, led me up Fountains Fell and into a second night. My crew would later tell me this was when they first felt concerned, the only time I got crochety with them (something about a toothbrush). I really, really, really wanted to sleep. But Nicky Spinks, now accompanying me with Jason and Sam Green, wouldn't let me. She would instead thrust sweets into my face and trick me into chomping on a coffee bean (I hate coffee). I was losing time.

As dawn broke everything changed. I was joined by Mark Rochester and Galen Reynolds and suddenly we were scooting along. By the White House pub at around 11am, we had rebuilt that three-hour buffer plus change. With some 32 miles to go, it was beginning to feel a done deal. People were turning up to run with me, friends surprising me, strangers cheering me on. I relaxed too much. I forgot to eat and drink. I bonked. Wessenden Moore sapped the life out of me. Black Hill felt like a Himalayan mountain. My three-hour advantage felt like sand running through my hands.

Spinksy re-joined me, with David Riley, Paul Clough and Jamie Rutherford for the final stretch, 16 miles over Bleaklow and the iconic Kinder plateau. There was still a chance I could break the record by three hours. I regretted telling Nicky that. She grabbed my schedule and shot up Bleaklow. I had my lungs in my mouth trying to keep up. Devil's Dike was a torturous labyrinth, Nicky constantly disappearing around a corner ahead. At Snake Pass, Jamie saved me from tumbling into the road ahead of a car.

"I don't care about the three hours anymore, Nicky!" I yelled, more than once, as we chugged over the flagstones towards Kinder. She pretended not to hear me. She didn't want me to have any regrets, she told me later. I sort of hated her, for a bit.

Finally we tumbled down Jacobs Ladder and into hallowed Edale. I touched the wall of the Old Nags Head and stopped my Suunto at 61 hours, 35 minutes and 15 seconds.

I felt overwhelmed. Very grateful. And quite tired. A chair was pushed towards me and soon a magnificent pint of ale was in my unsteady hands.

Damian's book about running records/FKTs will be published by Vertebrate in May.